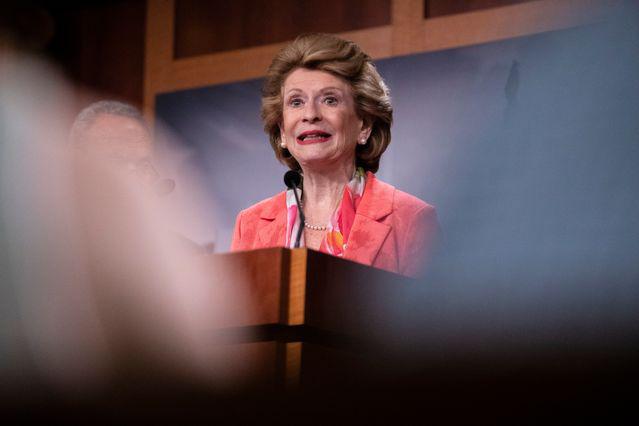 A new bipartisan crypto bill released on Wednesday has a chance of becoming law some day. Don’t expect that to save Coinbase Global (ticker: COIN) and other crypto trading platforms from a government crackdown.

The bill, helmed by Sens. Debbie Stabenow (D., Mich.) and John Boozman (R., Ark.), gives the Commodity Futures Trading Commission new powers and money to police trading of “digital commodities,” which the bill says includes Bitcoin and Ether. Stabenow and Boozman are the senior members of the Senate Agriculture Committee, which oversees the CFTC, giving this bill a greater chance than prior efforts of eventually becoming law.

The bill would require platforms such as Coinbase and FTX to register with the CFTC and take steps to protect consumers and prevent market manipulation. The CFTC would be able to make rules around using leverage to trade Bitcoin and other commodities, and the platforms would pay fees to the CFTC to help fund the agency’s increased responsibilities.

Left unaddressed is the very question that’s caused Coinbase and most of the crypto industry so much angst over the past few years: Which tokens are securities and which are commodities?

“We’re just saying that when something is defined and meets a test as a commodity that the folks that regulate commodities should be regulating digital commodities,” Stabenow said in a press conference. “We’re not defining what a security is.”

Stabenow said their bill, which is also sponsored by Sens. John Thune (R., S.D.) and Cory Booker (D., N.J.), identified Bitcoin and Ether specifically because the SEC in the past had publicly stated that those tokens aren’t securities, adding that she had confidence in SEC Chair Gary Gensler.

The omission is important for moving the bill forward, since any bills that touch securities laws would likely need input and signoff from the Senate Banking Committee.

But it also means crypto exchanges aren’t going to avoid a potential crackdown by the SEC for allegedly allowing the trading of securities without registering. Last month, the SEC brought an insider-trading case that said seven tokens trading on Coinbase are securities, an assertion the company disputes. The company is reportedly the subject of an SEC probe.

“To me, importantly it doesn’t take any authority from other regulators. It just gives new authority to the CFTC,” says Todd Phillips, director of financial regulation and corporate governance for the Center for American Progress, a center-left think tank.

In a tweet, Coinbase Chief Policy Officer Faryar Shirzad said the bill “protects consumers, and affirms that top Ds and Rs in Congress understand the importance of digital asset commodity markets and the need for regulatory clarity.”

Rather than duking it out in a series of enforcement actions, the SEC and major crypto projects might eventually come to the negotiating table “agreeing upon exchange or broker-dealer registrations with ample exemptions and multiyear timelines for eventual compliance,” says Matthew Wholey, who analyzes digital asset policy for Washington, D.C.-based PolicyPartner.

It’s unclear whether the Senate Agriculture bill can become law this year. Stabenow and Boozman in the press conference said they hoped to have a hearing on the bill as soon as September. However, with Congress turning its eyes to the November midterm elections, it might be more likely for the bill to advance next year, according to policy analysts.

“Lawmakers are still struggling with some foundational questions and there simply is not sufficient consensus to expect a successful legislative effort in the near-term,” says BTIG Director of Policy Research Isaac Boltansky. “This bill is unlikely to become law this year, but core structural elements of this bill will inform the debate during the next Congress and should be the foundation of a future package.”

Editor：Callie
Proofreading：AUREL
Reprinted from MarketWatch , the copyright all reserved by the original author.
Crypto
Nice, worth sharing!

Lose big on crypto? Here's how to reduce the sting

Losses from crypto hacks surged 60% to $1.9 billion from January to July, Chainalysis says